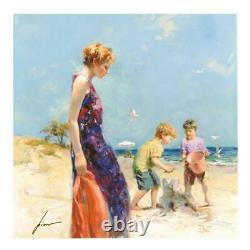 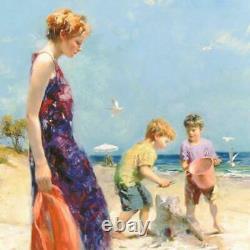 Br>Artist info: Born Giuseppe Dangelico Daeni in Bari, Italy on November 8, 1939, Pino began his studies at the city's Art Institute. He attended Milan's Academy of Brera in 1960 honing in on his talent for painting the human figure. During his two years at the academy, he was influenced by the the Pre-Raphaelites and Macchiaioli. His work was featured in numerous major exhibitions all over Italy and Europe from 1960 to 1979. Two of Italy's largest publishers, Mondadori and Rizzoli, commissioned him to do book illustrations.

However, despite his rising success and new opportunities, Pino felt restricted in Milan. Seeking complete artistic freedom, Pino ended up in the United States in 1979.

He was sponsored by the Borghi Gallery, where he held many shows in New York and Massachusetts. Nonetheless, moving to the United States turned out to be quite a challenge. His sponsorship barely supported him and his family, which was only made more complicated by the fact that he barely spoke English and his sole method of transportation was a bicycle.

After many failed attempts at finding gainful employment, Pino finally got a break in February of 1980 when Zebra Books Publishers gave him the job of creating a book cover. The success of his illustrations was so great that he was soon able to network with many prominent publishers of romance novels. His popularity blossomed within the literary community. Pino dedicated 13 years to illustrating book covers, but never lost his desire to someday return to fine art. His passion for creating pieces that break free of all outside restrictions fueled his undying dedication to fine art, which he continued to create with much success until his passing in 2010.

Pino's multitude of exquisite creations continue to be ardently collected and admired by fans worldwide. Colors of actual artwork may vary slightly from colors on your screen due to digital screen calibration varying between digital devices. See my other listings for more art.

This item is in the category "Art\Art Prints". The seller is "upslant" and is located in this country: US.

This item can be shipped worldwide.