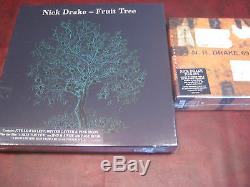 NICK DRAKE - FRUIT TREE BOX SET - RARE 3 LP SET & DVD Limited Edition to 2000 pieces classic analog made in England - high-definition Virgin Vinyl pressing for superior fidelity. OUT OF PRINT AND OUR LAST SET FOREVER. PLUS WE ARE ADDING AS A BONUS NICK DRAKES TUCK BOX 5 CD SET FOR THE COLLECTORS WHO WANT IT ALL. So Don't Miss Out on being one of the last people to own this outstanding pressing. This is one the last pressing you will ever see at this price. & TYPE IN DRAKE INTO THE SEARCH FIELD WITHIN OUR STORES SECTION AS YOUR PERSONAL CODE FOR ALL SIMPLY VINYL INDIVIDUAL TITLES + INFORMATION WILL APPEAR. The nicest thing you can do for your stylus and your ears. The ultimate record -- the way music was meant to be heard and of superior quality for any Audiophile. You should never pass up the opportunity to upgrade your collection. They're each very limited in their pressings and disappear with extraordinary quickness from the vinyl market. This causes prices to skyrocket because once they are gone, they are gone forever!

Don't second-guess yourself with this chance to upgrade your collection because before you know it, the opportunity will have passed forever. This limited edition (2,000), one-time-only version of. Features all three of Nick Drake's classic studio VINYL albums.

The updated box set (out of print in any form for seven years) includes, on DVD for the first time, the Nick Drake biographical film. It's impossible to keep count of the contemporary artists who cite Drake as an inspiration, but a cursory round-up includes R.

FAMILY TREE: originally released in 2004 to add to and replace the TIME OF NO REPLY compilation, FAMILY TREE is a collection of recordings made before the Island Records period, from a 9 year old Nick playing Mozart through to spoken word pieces, early songs, cover versions and demos recorded to secure his contract, as well as two recordings by his mother Molly Drake perhaps written in response to her son (Originally released in 2007). Each CD comes housed in mini-replica LP sleeves and come with reproductions of the original shop posters for each release.

The box set itself is a 7-inch square and the design depicts Nick Drake's own tuck box from his Marlborough College days, used to guard the various cakes dispatched weekly from his mother, Molly Drake. The Thoughts of Mary Jane. At the Chime of a City Clock. One of These Things First. Come In to the Garden (introduction). They're Leaving Me Behind. Poor Mum (written & performed by Molly Drake).

All My Trials (Traditional)(with Gabrielle Drake). Kegelstatt Trio for clarinet, viola and piano (Mozart)(Nick on clarinet with his aunt & uncle). Strolling Down the Highway (Bert Jansch). Been Smokin' Too Long (Robin Frederick). Tomorrow Is a Long Time (Bob Dylan).

If You Leave Me (Traditional, Dave Van Ronk). Here Come the Blues Jackson C. Blues Run the Game Jackson C. My Baby So Sweet (Traditional, Blind Boy Fuller). Milk and Honey Jackson C. (written & performed by Molly Drake). FACTORY SEALED OUT OF PRINT PRODUCT is IRREPLACEABLE and therefore NOT RETURNABLE. International Buyers are responsible for their countrys. The fast, easy, and secure way to pay online.

This item is in the category "Music\Records". The seller is "mymusicfix2" and is located in Lake Forest, California. This item can be shipped worldwide.