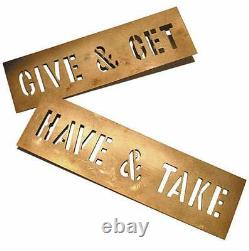 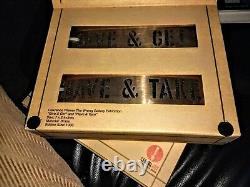 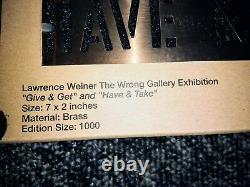 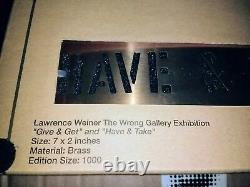 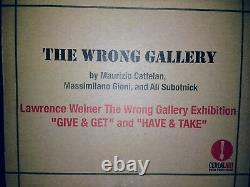 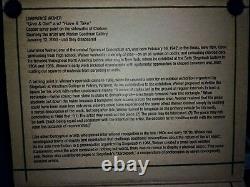 Stencil Set by Lawrence Weiner - HAVE & TAKE, GIVE & GET - from The Wrong Gallery Exhibition. Approx 16.51cm x 5.08cm (approx 6.5 x 2). Limited to 1,000 unnumbered copies. Produced by Cerealart by Maurizio Cattelan, Massimilano Gioni and Ali Subotnick. Housed in a cardboard Box.

Text on inside of the flap of the box. The Wrong Gallery is an edition of 1:6 scale reproductions of New Yorks smallest exhibition space. Open the door, turn on the light, install a work and become the curator youve always imagined you could be by organizing your own personal gallery program.

The Wrong Gallery was the smallest exhibition space in New York, located at 516A1/2 West 20th Street in Chelsea, opening in 2002 and closing in September 2005. The Wrong Gallery reopened at The Tate Modern in December 2005. The non-profit venue has 1 square meter of exhibition space. The tiny gallerys exhibition program and artistic experimentations are conceptualized and directed by Maurizio Cattelan, Ali Subotnick and Massimiliano Gioni, and so far they have organized over 30 exhibitions featuring works by Lawrence Weiner, Elizabeth Peyton, Paul McCarthy and many more.

As the wrong dealers say, The Wrong Gallery is the back door to contemporary art, and its always locked. (born February 10, 1942) is one of the central figures in the formation of conceptual art in the 1960s. His work often takes the form of typographic texts.

Weiner was born in the Bronx, New York the son of a candy-store owner. After graduating from school at 16, he had a variety of jobshe worked on an oil tanker, on docks, and unloading railroad cars. After studying at college for less than a year, he travelled throughout North America before returning to New York. Weiner is regarded as a founding figure of Post Minimalism's Conceptual art, which includes artists like Douglas Huebler, Robert Barry, Joseph Kosuth, and Sol LeWitt.

Weiner began his career as an artist as a very young man at the height of Abstract Expressionism. His debut public work/exhibition was at the age of 19, with what he called Cratering Piece. An action piece, the work consisted of explosives set to ignite simultaneously in the four corners of a field in Marin County, California. That work, as Weiner later developed his practice as a painter, became an epiphany for the turning point in his career. His work in the early 1960s included six years of making explosions in the landscape of California to create craters as individual sculptures.

He is also known during his early work for creating gestures described in simple statements leading to the ambiguity of whether the artwork was the gesture or the statement describing the gesture: e. Two minutes of spray paint directly on the floor.. " or " A 36" x 36" removal of lathing or support wall... Came up with his Paragraphs on Conceptual Art, Weiner formulated his "Declaration of Intent" (1968). The artist may construct the piece.

The piece may be fabricated. The piece need not be built. Each being equal and consistent with the intent of the artist the decision as to condition rests with the receiver upon the occasion of receivership. Please look at my other items including rare modern and contemporary art and design pieces.

The item "LAWRENCE WEINER'WRONG GALLERY' NY RARE 2-PIECE BRASS STENCILS, ISSUED 2005" is in sale since Sunday, December 10, 2017. This item is in the category "Art\Other Art".

The seller is "ashbinx74" and is located in Bruton. This item can be shipped worldwide.